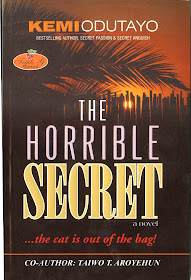 By Omiko Awa
TRUTH, no matter the length of time concealed, will eventually be unveiled. Time may delay it, circumstances may hinder it, truth will surely come to pass.
The Horrible Secret written by the duo of Kemi Odutayo and Taiwo T. Aroyehun, and published by ME4 Communications clearly demonstrate this universal truism.
Set in Nigeria, the authors tell of how a highly placed police officer, AIG Clement Udoku, uses his position to sabotage the government by working with some politicians and notable Igbo personalities to dismember the country.
Being magnanimous to his nephew, Chidi, whose parents he killed in disguise, Udoku sponsored Chidi’s education from secondary school to the Master’s degree aside getting him a police job. Though, Chidi’s mother was not a target of the real plot, her closeness to her husband at the time of carrying out the plan caused her death.
However, unknown to Chidi, a senior Police Investigative Officer, that he was revolting against the cabal that set him up, he arrested Sergeant Rogers, who was involved in gun-running business and as well an inner circle member of Ekigbo; a group set up to oust the government in power. Later released on the orders of Udoku, Chidi on closer investigation found out that he was working for a cabal of dissidents, which included his uncle.
While undertaking police course in London, Chidi ran into Bimbo, a Nigerian, whose lack of care by the heartthrob, Kelvin, turned her to a pickpocket. She picked Chidi’s purse, but had to return it when the latter gave her a chase, and on apprehending her, he showed mercy to the extent of giving her money for her studies, the major reason she took to picking pockets. This act of kindness surprised Bimbo that had expected the worst from a man she neither knew and whom she thought would take advantage of her.
Aside from setting Bimbo free from the grips of her fiancé, Kelvin, who unknown to her was a criminal, Chidi began to care for her.
On return to the country upon graduation, Chidi was set before two masters­­­ — the state and the underground ethnic group, Ekigbo —  headed by his uncle. Being loyal to him, he obliged to work for the two groups, only to discover he had been co-opted to fulfill a mission masterminded by selfish and greedy individuals led by Senator Obiora.
Coming in contact with Vivian, a goal getter, whose desire for sex and power is endless, Chidi knew that there was more to it than meets the eyes. Desperate to get to the root of the set-up, as the lady in question wants to impose herself on him in marriage even to the point of arranging with Kelvin, who has returned to Nigeria at a prize to kill Bimbo, Chidi strived to protect Bimbo.
Knowing that Kelvin had ulterior motives for wanting to kill Bimbo, Vivian attempted to withdraw from the plot, but behold, it was too late, as the news of Bimbo’s kidnap had got to Chidi, her new fiancé. 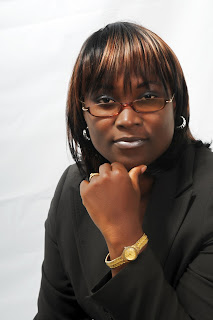 As Chidi was making efforts to bring the criminals to justice, he was under the watchful eyes of the state for fraternising with Ekigbo and the cabal that wants to cede from the country with Project New Dawn on November 29. Trailing the kidnappers of his love, the lovebird was himself trailed by Sergeant Rogers whom he had at a point arrested, but as fate may have it; the state was also on the heels of the two, unknown to them.
Chidi found his way to the captors of his love; Rogers followed him there and in a shoot out that claimed the lives of Kelvin and Vivian; he fell into the hands of Rogers who while boasting of having killed Chidi’s parents and now wants to kill Chidi too, exposed AIG Udoku’s collaboration in the matter that has been hidden from him.
Roger’s revelation, though a surprise to him, confirmed what the Commissioner of Police had earlier told him. This revelation was said to the hearing of Ambrose, who later saved Chidi and arrested Rogers and his cahoots, which included Senator Obiora, Vivian’s father.
The book reflectss how Chidi shuns the juicy promises of his position to stand for the right values, uphold his religious belief and make a difference in the society.
The authors show how government works and the intrigues of highly placed officials that work as agents to underground organisations in the name of official duties. In simple terms, the duo of Kemi and Taiwo have once more shown that lies no matter how beautifully painted would one day succumb to the truth.
However, irrespective of the gripping story line and suspense, the book has some grammatical errors and clumsy expressions that hinder comprehension; for example in page 27, it states: His uncle was presently an Assistant Inspector General of Police. Furthermore words such as cloths/clothes, check/cheque and others were wrongly used. These and others should be looked into.
OMIKO AWA at 05:09
Share